Off the eastern coast of Mozambique in Africa is an island country called “Comoros.” Prior to its French occupation in 1841, the islands were known by its Arabic name, “Camora.” There is an 1808 map of Africa that refers to the islands as “Camora.” 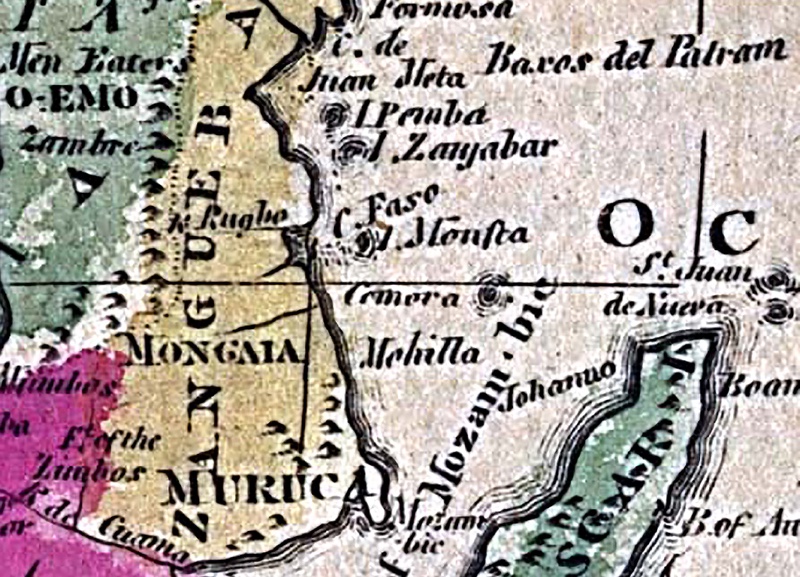 Camora is near center in the above 1808 Map of Africa

In fact, the uniform spelling for Hill Cumorah in the 1830 edition of the Book of Mormon is spelled “Camorah.”

The allegation that Joseph Smith read of Captain Kidd, learned of “Comora” and “Moroni,” and implemented those names in the Book of Mormon is poorly reasoned and poorly documented.

Pomeroy Tucker claimed Joseph was an avid reader and had access to numerous “dime novels” about pirates and Captain Kidd. Dime novels did not appear until the 1860s. Multiple observations from Tucker’s writings verify that he was highly biased and unreliable.

Joseph Smith’s mother, Lucy Mack Smith, recalled that he was "much less inclined to the perusal of books than any of the rest of the children." There is no reliable evidence Joseph Smith ever read a book that mentioned Captain Kidd.

The primary published source for stories about Captain Kidd was Charles Johnson's 1724 book A General History of the Robberies and Murders of the Most Notorious Pirates. However, a computerized search of it fails to identify the words Moroni, Cumorah, Comora, Camora, Comoros, Camorah, or Comorah. Alleging that learning about Captain Kidd would automatically expose a reader to the words Comoros, Comora, or Moroni is unsupported.

The map provided in The CES Letter contains hundreds of place names.  “Comoros,” a remote little island off the coast of Africa, is found on the map in small print, but “Moroni” is not.

The largest town on Comoros was named “Moroni” or “Mūrūnī” in Arabic. The name would only have been included on a regional map, which were nonexistent or much rarer in upstate New York in the 1820s.

There is no evidence that Joseph ever saw a map of Africa, let alone a map with such detailed names of islands and towns.

If Joseph Smith were to borrow or plagiarize names from a map like the 1808 African map shown in The CES Letter, it is strange that only one of hundreds was used.