Isaiah 9:1 is a bit unclear and hard to read in in KJV. Let's look at a different translation. The New International Version (NIV) says:

Nevertheless, there will be no more gloom for those who were in distress. In the past he humbled the land of Zebulun and the land of Naphtali, but in the future he will honor Galilee of the nations, by the Way of the Sea, beyond the Jordan.

Scholars believe this verse is referring to the doom and gloom Israel felt from the Assyrian captivity led by their king Tiglath-Pileser III between 745 B.C. - 722 B.C.

The four locations mentioned in that verse are all areas that came under Assyrian captivity at that time:

There are three potential explanations:

1. Joseph Got it Wrong - Joseph said the Book of Mormon was the "most correct book" on the Earth. Not the 100% correct book on the Earth. It's entirely possible that Joseph misunderstood that scripture and human error crept in. A simplistic interpretation alleges he added it by mistake. However, the complexity of the text and other changes in the Old Testament verses as they appear in the Book of Mormon reveal that to be an inadequate evaluation. Joseph, who didn’t know Jerusalem had a wall built around it, would probably have not known the geography of the land of Zebulon, the Land of Naphtali, the course of the Jordan river or the location of the sea of Galilee, or the location of Red Sea. Yes, this theory raises the question. 'If an error here, then where else?'

Joseph Smith could have easily struck out the word “Red” in subsequent printings of the Book of Mormon if he had recognized it as an error. He corrected a number of printing mistakes, but not this. It is found in current editions.

2. It's a Scribal Error - The word “Red” could be the result of a scribal error between Joseph’s dictation and Oliver’s transcription. Several other instances of scribal errors in the Book of Mormon printer’s manuscript can be identified.

The King's Highway also was part of what was known in ancient times as the Way of the Red Sea, which led out of Egypt along the shores of the Red Sea, passed through Edom and changed direction after meeting with the Way of the Sea, in Galilee, to go into Mesopotamia. It is possible that Joseph journeyed this way, or at least part of this way, to avoid going through Judaea when he took Jesus into Nazareth as a young child. If so, it would be quite correct in that the light would pass into the region of Naphtali via the Way of the Red Sea. Joseph sought to avoid contact with Archelaus and a back route would be one of the best ways to avoid contact.

We also know that Jesus went into the wilderness for his temptation after being baptized in a region on the other side of the Jordan. The English Book of Mormon has Bethabara as do several versions of the Bible while [several other translations have] Bethany beyond Jordan. He would then have come down from Galilee to be baptized on the other side of the Jordan (east of the river; 'beyond Jordan' meant to the east of the Jordan River), and come down around the Way of the Red Sea and around the Dead Sea to the Wilderness of Judaea. Remember, Jesus' wandered the wilderness for forty days, plenty of time to travel around the Dead Sea in that manner, that region being one the most inhospitable in the main. There are possible hints that Jesus came through Edom or Idumea. One way that he could have done so is to travel the Way of the Red Sea, which passes through Edom. The records of Jesus' life and travels are scanty at best and it is impossible to know for certainty at this time. In any case, I am not willing to state without good evidence that this passage is in error with any degree of certainty, for in my opinion there is no certainty either way. I have sifted through much contradictory 'evidence' and have formed no solid conclusion on this textual matter." 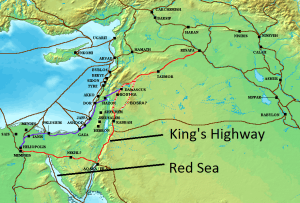