"Unlike the scholarly translators, [Joseph] went back beyond the existing texts to the minds of the prophets, and through them the mind of God."

Richard Bushman, What is Mormonism? p. 111

Those who believe Joseph Smith authored the book himself, they also get to explain how Joseph recited long biblical passages while staring into a dark hat.

- Mary Ann, Beyond the CES Letter 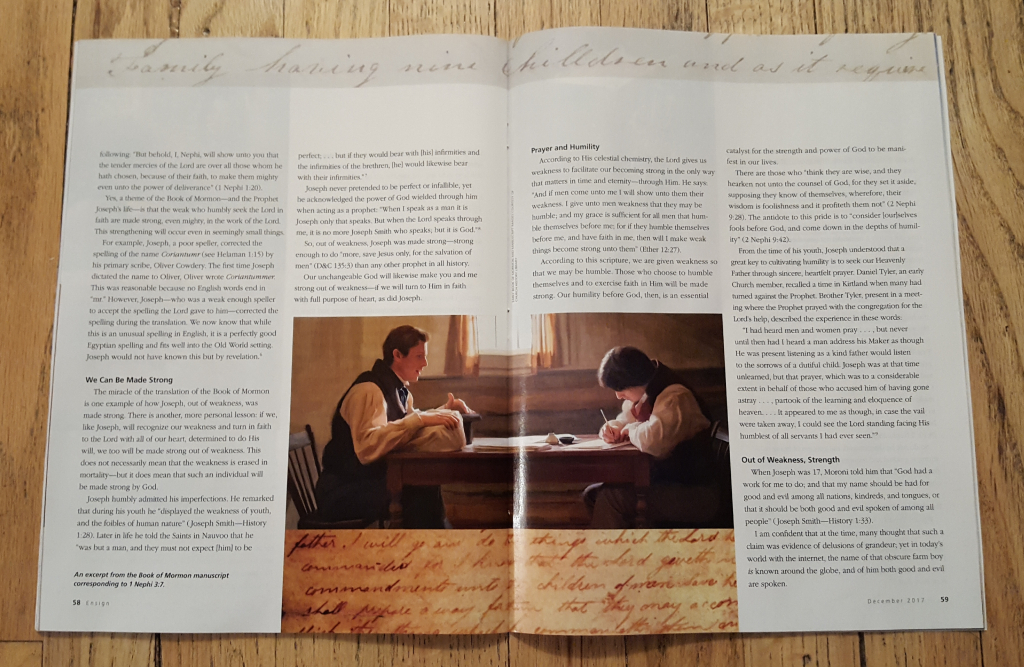 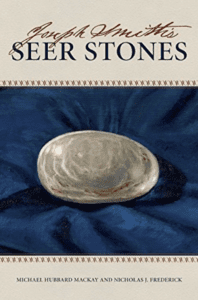 Artistic Representation of the Translation 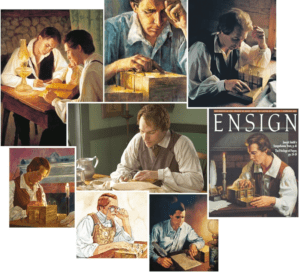 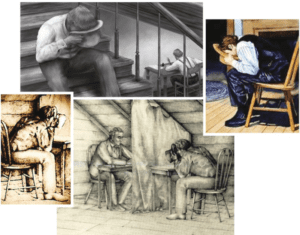 Why do we have artistic representations of Joseph Smith holding the gold plates while translating when we have accounts that he translated with his head in a hat and them under a cloth?

I will begin by saying that we still have pictures on our Ward bulletin boards of Joseph Smith with the Gold Plates in front of him. That has become an irksome point and I think it is something the church should pay attention to. Because anyone who studies the history knows that is not what happened. There is no church historian who says that is what happened and yet it is being propagated by the church and it feeds into the notion that the church is trying to cover up embarrassing episodes and is sort of prettifying its own history.

So, I think we ought to just stop that immediately. I am not sure we need a lot of pictures in our chapels of Joseph looking into his hat, but we certainly should tell our children that is how it worked... It’s weird. It’s a weird picture. It implies it’s like darkening a room when we show slides. It implies that there is an image appearing in that stone and the light would make it more difficult to see that image. So, that implies a translation that’s a reading and so gives us a little clue about the whole translation process. It also raises the strange question, ‘What in the world are the plates for? Why do we need them on the table if they are just wrapped up into a cloth while he looks into a seer stone?’

In other words, Joseph used the same magic device or “Ouija Board” that he used during his treasure hunting days. He put a rock – called a “peep stone” – in his hat and put his face in the hat to tell his customers the location of buried treasure on their property. He also used this same method for translating the Book of Mormon, while the gold plates were covered, placed in another room, or even buried in the woods. The gold plates were not used for the Book of Mormon we have today.

Since learning this disturbing new information and feeling betrayed, I have been attacked and gaslighted by revisionist Mormon apologists claiming that it’s my fault and the fault of anyone else for not knowing this. “The information was there all along,” they say. “You should’ve known this,” they claim.

Respected LDS historian and scholar Richard Bushman, as quoted above, understands the problem. Unlike these gaslighting revisionist apologists, he has compassion, understanding, and empathy for those who are shocked to learn this faith challenging information.

Thus, everything we have in the Book of Mormon, according to Mr. Whitmer, was translated by placing the chocolate-colored stone in a hat into which Joseph would bury his head so as to close out the light. While doing so he could see ‘an oblong piece of parchment, on which the hieroglyphics would appear,’ and below the ancient writing, the translation would be given in English. Joseph would then read this to Oliver Cowdery, who in turn would write it. If he did so correctly, the characters and the interpretation would disappear and be replaced by other characters with their interpretation. 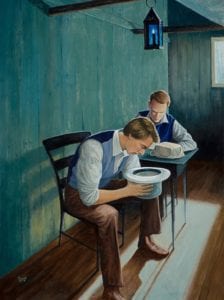 Anthony Sweat, a professor of church history at BYU as well as an artist, made the following points during an interview on LDS Perspectives podcast. "I can’t speak for the church or everything they produce but it has a stamp of officialness on it… I wish that there would be a disclaimer that says ‘all images within this magazine are meant to convey ideas or emotions that are not depictions of historical or doctrinal reality.’... He added, "Whatever they [artists] want to use to evoke God inspiring the sacred text, let them use it. I think it’s more responsibility to have the viewer to see art as a medium, not necessarily as historical reality."

Anthony created a painting conveying Joseph translating while using a hat and indicated it was challenging. "It was a hard composition… I did some sketches and drawings with his face buried in the hat and all it looked like was sick. So I joked in the piece I wrote that I wanted to call it the sick of Joseph instead of the Stick of Joseph. It wasn’t conveying that feeling of revelation or inspiration and sacred work."

Professors Sweat further addressed this issue in his essay essay titled By The Gift and Power of Art.

"I asked [artist] Walter Rane about creating an image of the translation with Joseph looking into a hat, he surprised me by telling me that the Church had actually talked to him a few times in the past about producing an image like that but that the projects fell by the wayside as other matters became more pressing."

Purpose of the Plates

Did Joseph use the plates at all during translation?

Numerous accounts indicate that Joseph put his head in a hat. However, we have at least one account to the contrary:

He [Oliver Cowdery] represents Joseph as sitting by a table with the plates before him, and he reading the record with the Urim & Thummim. Oliver, his scribe, sits close beside to hear and write every word as translated. This is done by holding the translators over the words of the written record."

Why were there gold plates if they just sat wrapped up in a cloth while he looked into a seer stone?

It also raises the strange question, ‘What in the world are the plates for? Why do we need them on the table if they are just wrapped up into a cloth while he looks into a seer stone?’

After laying the groundwork, the professors continue:

Finally, the testimony of David Whitmer simply does not accord with the divine pattern. If Joseph Smith translated everything that is now in the Book of Mormon without using the gold plates, we are left to wonder why the plates were necessary in the first place. It will be remembered that possession of the plates placed the Smith family in considerable danger, causing them a host of difficulties. If the plates were not part of the translation process, this would not have been the case. It also leaves us wondering why the Lord directed the writers of the Book of Mormon to take a duplicate record of the plates of Lehi. This provision which compensated for the loss of the 116 pages would have served no purpose either.

Further, we would be left to wonder why it was necessary for Moroni to instruct Joseph each year for four years before he was entrusted with the plates. We would also wonder why it was so important for Moroni to show the plates to the three witnesses, including David Whitmer. And why did the Lord have the Prophet show the plates to the eight witnesses? Why all this flap and fuss if the Prophet didn’t really have the plates and if they were not used in the process of translation?

What David Whitmer is asking us to believe is that the Lord had Moroni seal up the plates and the means by which they were to be translated hundreds of years before they would come into Joseph Smith’s possession and then decided to have the Prophet use a seer stone found while digging a well so that none of these things would be necessary after all. Is this, we would ask, really a credible explanation of the way the heavens operate?

How could it have been expected of me and any other member to know about and to embrace the rock in the hat translation when even these two faithful full-time professors of religion at BYU rejected it as a fictitious lie meant to undermine Joseph Smith and the truth claims of the Restoration?

The historical record doesn't always provide this answer answers to every question. There is no question that Joseph dictated portions of the Book of Mormon translation while the plates were covered.  Additionally, there is at least one account where Joseph may have openly used the plates in the translation process. Richard L. Anderson speculated that Joseph may have kept the plates covered at times because he knew that looking at the characters he couldn't read wouldn't yield any result. Rather Joseph knew through pondering and using the Urim and Thummim the Lord would reveal the text.

Explaining away the Book of Mormon Witnesses, Richard L. Anderson (2004)