(The following is a quick biographic snapshot of Zina)

Why is Joseph Smith not listed as one of Zina’s husbands in the “Marriage and Family” section or anywhere else on her biographical page on lds.org? Why is there not a single mention or hint of polyandry on her page or in that marriage section when she was married to two latter-day prophets and having children with Brigham Young while still being married to her first husband, Henry?

The author of The CES Letter is obviously unaware of Zina Huntington's history. There is no cover-up or dishonesty or whitewashing of history.

Zina Diantha Huntington, sister of Presendia, was born on January 31, 1821, in Watertown, New York, to William Huntington and Zina Baker.

Since Zina Huntington was legally married when she was sealed to the Prophet, some authors have accused Zina of practicing sexual polyandry, or having two husbands. In an 1898 interview with RLDS elder John W. Wight, Zina provided clarifying responses regarding the type of sealing she experienced with the Prophet:

Like other eternity only plural wives, Zina referred to the events and the process that led up to her sealing to the Prophet, but she left no record discussing any special interactions with him after the marriage ceremony.

Since Zina Huntington was legally married when she was sealed to the Prophet, some authors have accused Zina of practicing sexual polyandry, or having two husbands. In an 1898 interview with RLDS elder John W. Wight, Zina provided clarifying responses regarding the type of sealing she experienced with the Prophet:

“Then it is a fact, Mrs. [Zina] Young, is it not, that you married Mr. Smith at the same time you were married to Mr. [Henry] Jacobs?"

”What right have you to ask such questions? I was sealed to Joseph Smith for eternity.”

“Mrs. Young, you claim, I believe, that you were not married to him for time?”

“For eternity. I was married to Mr. Jacobs, but the marriage was unhappy and we parted.” . . .

“I presume you are aware of the fact that it is claimed by your church that the marriage with Mr. Jacobs was not an agreeable one.”

“It is a fact then, Mrs. Young, that Joseph was not married to you only in the sense of being sealed for eternity?”

“As his wife for time and eternity.”

“Mrs. Young, you have answered that question in two ways; for time, and for time and eternity.”

When the interviewer pointed out the confusion, Zina clarified that her sealing was for eternity.

Zina and Henry, whose legal marriage was still intact, reunited after the martyrdom since she conceived a son with him approximately June 30, 1845. Whether they experienced another nuptial ceremony for time by Heber C. Kimball or another Church leader is undocumented.

Henry and Zina attended the Nauvoo Temple on February 2, where Henry stood as a witness as Zina was resealed to Joseph Smith for eternity. At this point, a unexpected thing occurred. Zina, who was seven months pregnant with Henry’s child, was sealed to Brigham Young for time. Zina’s dissatisfaction with her marriage to Henry may have played a role. As quoted above, she told an interviewer in 1898: “I was married to Mr. Jacobs, but the marriage was unhappy and we parted.”[2] She also characterized the union as “a most unhappy and ill-assorted marriage.”[3] Whether she had privately met with Brigham Young and requested a separation from Henry is unknown.

Despite her February 2, 1846, temple marriage for time to Brigham, Zina traveled with Henry as they left Nauvoo for the West just five days later. Henry cared for pregnant Zina who delivered their second child, Henry Chariton Jacobs, on March 22 at the crossing of the Chariton River in Iowa. A little over two months later while camped at Mt. Pisgah, Iowa, Brigham Young called Henry on a mission to England, apparently informing him that Zina was no longer his wife and advising him to marry another someone else.

With Brigham’s help and assistance from her brothers Dimick, Oliver, and William, she was established in a small cabin in the central fort in Salt Lake City. Zina’s biographers recount the next events:

In early February 1849, Brigham stopped by—apparently unannounced—one Sunday evening, and the two “had a very agreeable veset.” . . . The next week, on 13 February, Zina for the first time invited Brigham to her home for supper. Zina does not mention seeing her husband again for a month. Then on 15 March Brigham reappeared, and this time, she records briefly, he “stayed the night.” The next day Zina “prepared to move”—evidently as a result of Brigham’s instructions the previous night.[4]

Finally Zina and Brigham were husband and wife.  She bore him only one child, but lived in his house with several of his other plural wives until her death.

Zina served as the third General President of the Relief Society, set apart on April 8, 1888, and as the first Matron of the Salt Lake Temple in 1893. Eight years later she died firm in the faith she had sacrificed for most of her life. In an 1895 memoir she reflected: “I received a testimony for myself from the Lord of this work, and that Joseph Smith was a Prophet of God before I ever saw him, while I resided in the state of New York, given in answer to prayer. I knew him in his lifetime, and know him to have been a great, true man, and a servant of God. . . . I wish to bear my testimony to the principle of celestial marriage, that it is true.”[5] 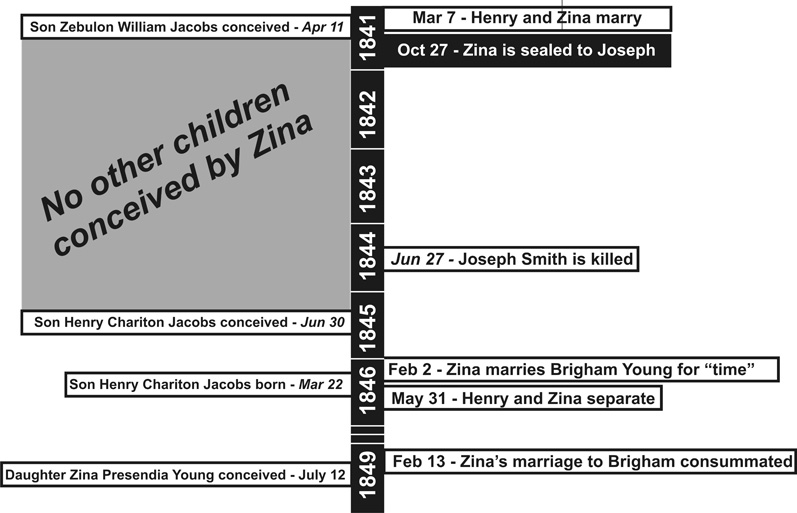 Zina and Her Men: An Examination of the Changing Marital State of Zina Diantha Huntington Jacobs Smith Young (2006 FAIR Conference) by Allen Wyatt

The Wives of Joseph Smith and Their Testimony- Zina Huntington

Zina and Her Men: An Examination of the Changing Marital Status of Zina Huntington