Did Joseph coerce 31 people so lie on his behalf swearing that he didn't practice polygamy in a sworn affidavit?

In an attempt to influence and abate public rumors of his secret polygamy, Joseph asked 31 witnesses to sign an affidavit published in the LDS October 1, 1842 Times and Seasons stating that Joseph did not practice polygamy. Pointing to the above-mentioned D&C 101:4 scripture, these witnesses claimed the following:

“...we know of no other rule or system of marriage than the one published from the Book of Doctrine and Covenants.(The CES Letter omits this subsequent text in red: and we give this certificate to show that Dr. J. C. Bennett's "secret wife system” is a creature of his own make as we know of no such society in this place not never did.”

The problem with this affidavit is that it was signed by several people who were secret polygamists or who knew that Joseph was a polygamist at the time they signed the affidavit. In fact, Eliza R. Snow, one of the signers of this affidavit, was Joseph Smith’s plural wife. Joseph and Eliza had been married 3 months earlier, on June 29, 1842. Two Apostles and future prophets, John Taylor and Wilford Woodruff, were also aware of Joseph’s polygamy behind the scenes when they signed the affidavit. Another signer, Bishop Whitney, had personally married his daughter Sarah Ann Whitney to Joseph as a plural wife a few months earlier on July 27, 1842. Whitney’s wife and Sarah’s mother Elizabeth (also a signer) witnessed the ceremony.

What does it say about Joseph Smith and his character to include his plural wife and associates – who knew about his secret polygamy/polyandry – to lie and perjure in a sworn public affidavit that Joseph was not a polygamist?

As mentioned in the above “Polygamy | Polyandry” section, Joseph was able to influence and convince many of the 31 witnesses to lie and perjure in a sworn affidavit that Joseph was not a polygamist. (simply not true. This was a true response to John C. Bennett's behavior) Is it outside the realm of possibility that Joseph was also able to influence or manipulate the experiences of his own magical thinking, treasure digging family and friends as witnesses? (Able to manipulate the witness experiences? Zero evidence for this magician theory at all) Biased Mormon men who already believed in second sight and who already believed that Joseph Smith was a true prophet of God?

The CES Letter misrepresents the historical details surrounding this document. The focus of the statement was to renounce Dr. J. C. Bennett's "secret wife system,” which was not sanctioned by the Church or its leaders.

The statement was a rebuke of John C. Bennett's adulterous teachings and behaviors. Assuming that it was a denial of celestial marriage is not accurate.

We the undersigned members of the church of Jesus Christ of Latter-Day Saints and residents of the city of Nauvoo, persons of families do hereby certify and declare that we know of no other rule or system of marriage than the one published from the Book of Doctrine and Covenants, and we give this certificate to show that Dr. J. C. Bennett's "secret wife system” is a creature of his own make as we know of no such society in this place not never did.

Years later Eliza R. Snow wrote to Joseph F. Smith explaining the intent of those that signed the statement:

At the time the sisters of the Relief Society signed our article, I was married to the prophet— we made no allusion to any other system of marriage than Bennett's— his was prostitution, and it was truly his, and he succeeded in pandering his course on the credulity of the unsuspecting by making them believe that he was thus authorized by the Prophet. In those articles there is no reference to divine plural marriage. We aimed to put down its opposite" (Eliza R. Snow to Joseph F. Smith, n.d., Joseph F. Smith, papers, 1854-1912, CHL).

The CES Letter simply misrepresents this episode. Joseph Smith was not involved and the women were not lying because their intent was simply to deny Bennett's immoralities.

Only a fraction of those who signed the document were even aware of celestial plural marriage at that time.

Overall, the number of authorized pluralists on October 1, 1842 were few.  Only three male and three female Church members were involved in “time and eternity” plural marriages.

The small number of individuals sealed in plural marriages was so small it would not have been considered a “system,” and certainly not a "rule." Plurality did not become a “rule” of the Church until 1852. 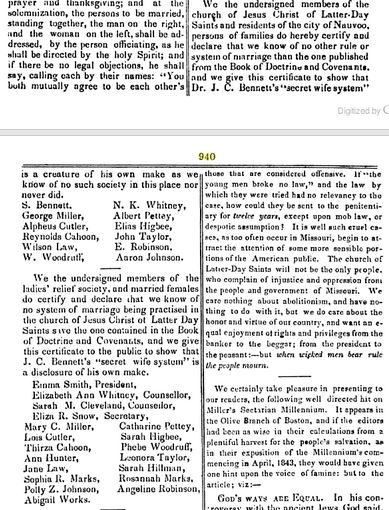 The stark differences between Bennett’s “spiritual wifery” and celestial marriage, coupled with the very limited involvement of Latter-day Saints with polygamy by October 1, 1842, demonstrates that none of those signing the document, including the seven who knew of celestial marriage or the two who had entered into it, were lying or perjuring themselves.

Contrary to the claims of The CES Letter, the language of the 1835 Doctrine and Covenant 101:4 does not prohibit plurality of wives