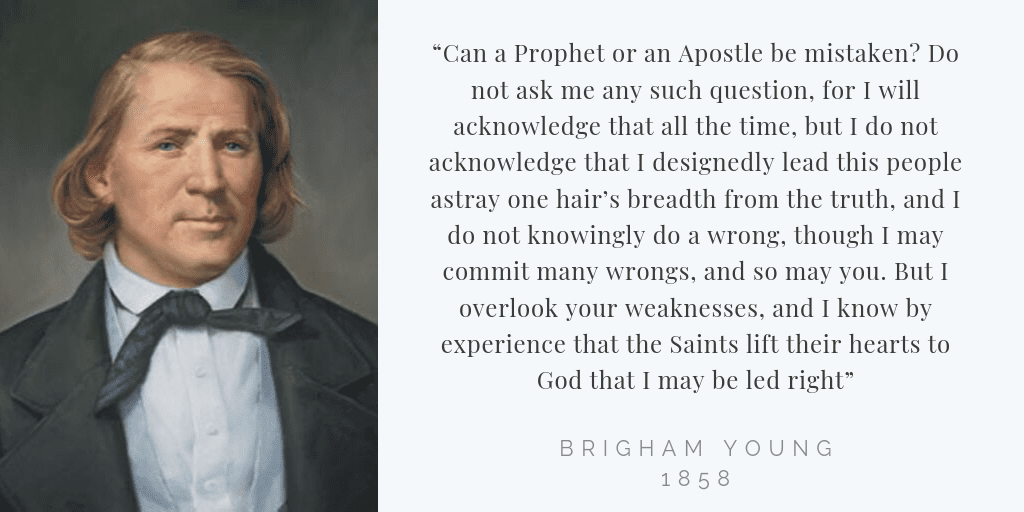 I’m told that prophets are just men who are only prophets when acting as such (whatever that means). I’m told that, like all prophets, Brigham Young was a man of his time. For example, I was told that Brigham Young was acting as a man when he taught that “God revealed to [him]” that “Adam is our father and God” and the “only God with whom we have to do.” Never mind that Brigham taught this over the pulpit in not one but two conferences and never mind that he introduced this theology into the endowment ceremony in the Temples.

Never mind that Brigham Young made it clear that he was speaking as a prophet:

I have never yet preached a sermon and sent it out to the children of men, that they may not call scripture. Let me have the privilege of correcting a sermon, and it is as good Scripture as they deserve. (the CES Letter deliberately omitted the portion in red)

Brigham Young qualified the type of “scripture” that he would sometimes give the people.

Brigham Young’s entire quote reads: “I have never yet preached a sermon and sent it out to the children of men, that they may not call Scripture. Let me have the privilege of correcting a sermon, and it is as good Scripture as they deserve. The people have the oracles of God continually” (italics added).

The author of The CES Letter seems confused on what it means to be a prophet. Webster’s 1830 dictionary defines a “prophet” as: “One that foretells future events; a predictor; a foreteller.”

On February 9, 1843, Joseph Smith taught “A prophet was a prophet only when he was acting as such.” The ability of a person to be a prophet is also dependent upon God. Amos reported: “Surely the Lord God will do nothing, but he revealeth his secret unto his servants the prophets” (Amos 3:7).  So a “prophet” does not constantly foretell the future, a prophet can serve as a prophet only when God is revealing his secrets to him. A prophet’s opinions are not necessarily inspired, although they may reflect great wisdom.

On other occasions Brigham Young described his views using the term “reckon”: “I reckon that Father Adam was a resurrected being.” Whatever his reasons for employing that term, it is clear that he was not declaring “scripture” to his listeners, but his own opinion.

Concerning his own life, Joseph Smith declared shortly before his death: “I never told you I was perfect—but there is no error in the revelations which I have taught.” His non-revelatory statements and opinions may not have been perfect, but his revelations were.

Why would I want my kids chanting “Follow the Prophet” with such a ridiculous and inconsistent 187-year track record? What credibility do the Brethren have? Why would I want them following the prophet when a prophet is just a man of his time teaching his “theories” that will likely be disavowed by future “Prophets, Seers, and Revelators”? If his moral blueprint is not much better than that of their Sunday School teachers? If, historically speaking, the doctrine he teaches today will likely be tomorrow’s false doctrine?