Brigham Young taught the doctrine that polygamy is required for exaltation:

The only men who become Gods, even the Sons of God, are those who enter into polygamy.
— JOURNAL OF DISCOURSES 11:269

Several other prophets after Young, including Taylor, Woodruff, Snow, and Joseph F. Smith gave similar teachings that the New and Everlasting Covenant of plural marriage was doctrinal and essential for exaltation.

No presiding Church leader has ever taught that polygamy is required for exaltation irrespective of when and where a person is born on earth. Between the 1840s and 1890, the issue was obedience, not some unique eternal blessing attached to the practice of plural marriage.

Statements made between 1852 and 1890, when plural marriage was treated as a commandment, can be easily quoted out of context to create the appearance that Church leaders taught that all men in the Celestial Kingdom would be polygamists.

The CES Letter repeats the most common quotation, which is from Brigham Young who made a statement in 1866 that is also very popular with Mormon fundamentalists:

“The only men who become Gods, even the Sons of God, are those who enter into polygamy. Others attain unto a glory and may even be permitted to come into the presence of the Father and the Son; but they cannot reign as kings in glory.”

However a new transcription of this discourse from George Watt's Pittman shorthand shows that the expectation to practice polygamy was totally dependent upon whether a people had the privilege to do so. There is no mention that all men and women in the Celestial kingdom will be polygamists: 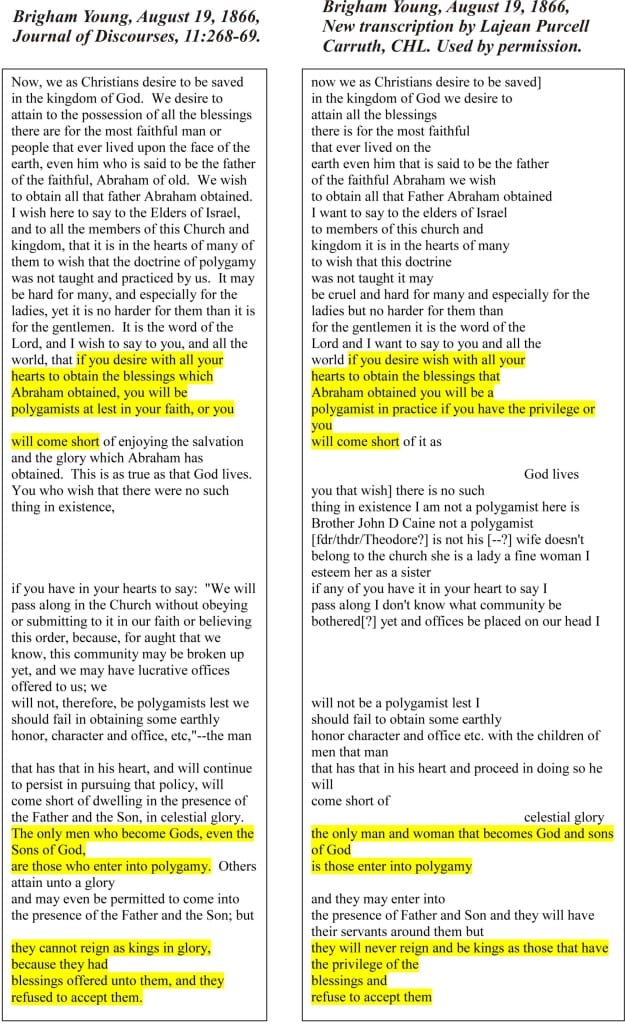 This new transcription demonstrates that twice Brigham Young emphasized that a person must have the "privilege" to practice plural marriage or there was no expectation to practice polygamy.

Another similar statement comes from an 1878 discourse by Elder Joseph F. Smith. He taught:

Some people have supposed that the doctrine of plural marriage was a sort of superfluity, or non-essential, to the salvation or exaltation of mankind. In other words, some of the Saints have said, and believe, that a man with one wife, sealed to him by the authority of the Priesthood for time and eternity, will receive an exaltation as great and glorious, if he is faithful, as he possibly could with more than one. I want here to enter my solemn protest against this idea, for I know it is false.

Alone this quotation can be read to mean that all men, irrespective of when and where they lived, were required to enter plural marriage to be fully exalted, which is a common interpretation by modern polygamists.   However, toward the beginning of the talk Joseph F. Smith clarified:

It [plural marriage] is a principle that pertains to eternal life, in other words, to endless lives, or eternal increase. It is a law of the Gospel pertaining to the celestial kingdom, applicable to all gospel dispensations, when commanded and not otherwise, and neither acceptable to God or binding on man unless given by commandment, not only so given in this dispensation, but particularly adapted to the conditions and necessities thereof, and to the circumstances, responsibilities, and personal, as well as vicarious duties of the people of God in this age of the world.

Apostle Smith's statement that plural marriage is "applicable to all gospel dispensations, when commanded and not otherwise, and neither acceptable to God or binding on man unless given by commandment" is perhaps the best available summary of the eternal position of polygamy in LDS history.

D&C 132: 18, 38 describe the condemnations to individuals who assume to practice plural marriage without the authority of the "one" man holding the sealing keys (v. 7).

Wilford Woodruff recorded in his journal on February 12, 1870, that a Church member, John Holement, “made a long speech upon the subject of polygamy. He contended that no person could have a Celestial glory unless he had a plurality of wives.” In response, President Brigham Young clarified that “there would be men saved in the Celestial Kingdom of God with one wife.”

On February 10, 1873, in the Salt Lake School of the Prophets, a question was raised regarding the truthfulness of the claim that “no man who has only one wife in this probation can ever enter Celestial Kingdom.” Wilford Woodruff “expressed disagreement and John Taylor said ‘he did not believe [it].’”