Of all the issues, the Book of Abraham is the issue that has both fascinated and disturbed me the most. It is the issue that I’ve spent the most time researching because it offers a real insight into Joseph’s modus operandi as well as Joseph’s claim of being a translator. It is the smoking gun that has completely obliterated my testimony of Joseph Smith and his claims.

There are three general approaches to the Book of Abraham, two by believers and one by unbelievers. 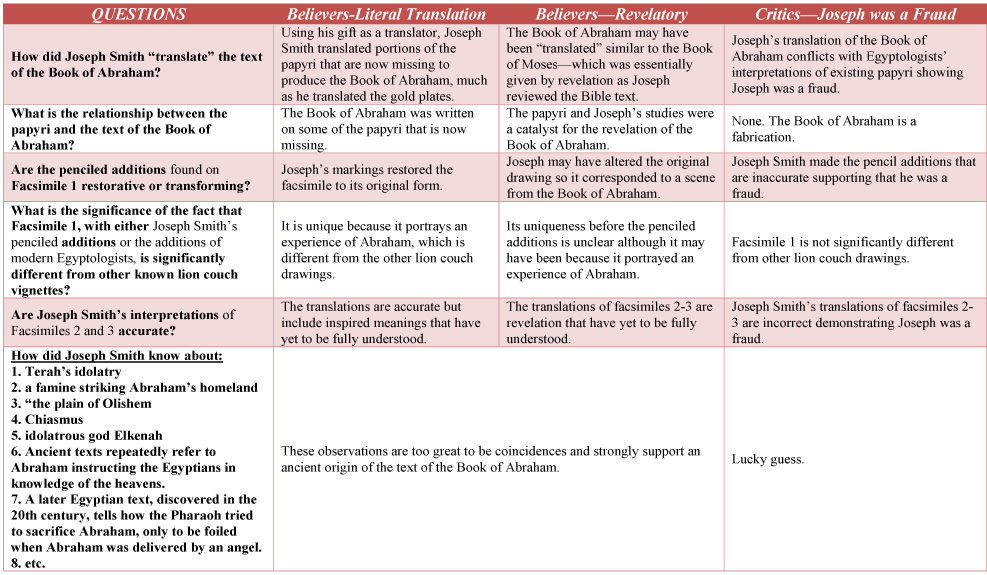 The author of The CES Letter is guilty of ignoring the reconstructions available to believers. In his presentation, he has cherry-picked those authorities that support his conclusions while overlooking counterevidence and showing no nuance in his narrow interpretations. His sweeping declarations are often based on little or no supporting evidence.

Many bright, qualified scholars accept the Book of Abraham as an authentic ancient text including Egyptologists, Semitists, experts in ancient Near Eastern history and culture, and experts in Mormon history. It could be argued that the alleged deficits portrayed in The CES Letter include many half-truths and even some misrepresentations of the historical record.

The CES Letter’s report of the Book of Abraham as a “smoking gun” is less compelling because the research reflects such high biases. Little or no attempt is made to address plausible interpretations that contradict the views expressed. The role of a prophet as he translates by the gift and power of God is not seriously considered.

Hugh Nibley explained: "Observers wishing to enter the debate on the Book of Abraham should plan to do some real homework. There is a large bibliography, and there are dozens of theories to master, not to mention a large body of evidence. Included are: (1) the texts of the "Joseph Smith Papyri" identified as belonging to the Book of the Dead, (2) the content and nature of mysterious "Sen-sen" fragment, (3) the so-called "Egyptian Alphabet and Grammar" attributed to Joseph Smith, (4) statements by and about Joseph Smith concerning the nature of the Book of Abraham and its origin, (5) the original document of Facsimile 1 with its accompanying hieroglyphic inscriptions, (6) the text of the Book of Abraham itself in its various editions, (7) the three facsimiles as reproduced in various editions of the Pearl of Great Price, (8) Joseph Smith's explanation of the facsimiles, (9) the large and growing literature of ancient traditions and legends about Abraham in Hebrew, Aramaic, Arabic, Greek, Slavonic, etc., and (10) the studies and opinions of modern scholars on all aspects of the Book of Abraham. "

The author of The CES Letter has failed to demonstrate any rigor on his part in approaching the Book of Abraham. His comments reveal a superficiality that fundamentally fails to appreciate the complexity of the issue. The lack of depth supports that it is agenda driven and less useful.

What's more, the author of The CES Letter has cherry-picked those authorities that support his conclusion while overlooking those that challenge him, has ignored counter-evidence, has shown no depth or nuance in his thinking, and has made sweeping conclusions based on little or no supporting evidence. He has failed to take seriously the important advice from Egyptologist John Gee:

"If you decide you want to enter the debate [on the Book of Abraham], you ought to do some real homework. There is a large bibliography, and there are dozens of theories to master, not to mention a large body of evidence. . . . You have to pay attention to what Latter-day Saints say about the papyri. It is they who have traced the history of the papyri, dug up what information is known about Antonio Lebolo, identified Joseph Smith Papyri X-XI as a Book of Breathings, and done much basic work on hypocephali, and they are the people who have access to the original documents. They know their own history much better than others do."