The surviving papyri from the Book of Abraham are Egyptian funerary texts.  Does this prove Joseph a fraud?

Egyptologists have also since translated the source material for the Book of Abraham and have found it to be nothing more than a common pagan Egyptian funerary text for a deceased man named “Hor” around first century C.E. In other words, it was a common Breathing Permit that the Egyptians buried with their dead. It has nothing to do with Abraham or anything Joseph claimed in his translation for the Book of Abraham. The Church admits this in its essay:

None of the characters on the papyrus fragments mentioned Abraham’s name or any of the events recorded in the book of Abraham. Mormon and non-Mormon Egyptologists agree that the characters on the fragments do not match the translation given in the Book of Abraham, though there is not unanimity, even among non-Mormon scholars, about the proper interpretation of the vignettes on these fragments. Scholars have identified the papyrus fragments as parts of standard funerary texts that were deposited with mummified bodies. These fragments date to between the third century B.C.E. and the first century C.E., long after Abraham lived.

The author of The CES Letter fails to inform his readers that since the 1960s the Church has freely admitted that the papyri fragments currently in possession of the Church do not contain the Book of Abraham.

Both Mormon and non-Mormon scholars agree the available fragments contain the Book of Breathings.

The surviving fragments are just a portion of all the papyri Joseph possessed when he produced the Book of Abraham.

Photos of the papyri were found on the front cover of the Church’s Improvement Era magazine for January 1968. The opening article acknowledges that they may be from "The Book of the Dead."  Click here 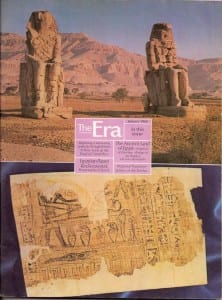 The author of The CES Letter is incorrect in his dating of the surviving papyri fragments. The fragments date some two to three centuries earlier than indicated in The CES Letter.

"Breathing Permit" is an inaccurate translation of what should be called "The Book of Breathings" or arguably the "Letter of Fellowship."

Rather than this being mere trivia, the dating and name of the text have implications for our understanding of the significance of the text. It's small (but still important) details like these that betray the author's ignorance on the issue.

Translation and Historicity of the Book of Abraham

Admission and Omission: What Is the Church’s Position on the Book of Abraham?

Some Puzzles from the Joseph Smith Papyri

Telling the Story of the Joseph Smith Papyri

The Ancient Owners of the Joseph Smith Papyri