In light of the James Strang/Voree Plates witnesses, the fact that all of the Book of Mormon Witnesses – except Martin Harris – were related to either Joseph Smith or David Whitmer, along with the fact that all of the witnesses were treasure hunters who believed in second sight, and in light of their superstitions and reputations...why would anyone gamble their lives by believing in a book based on anything these men said or claimed, or what’s written as the testimonies of the Witnesses in the preface of the Book of Mormon?

The criticisms in this summary statement do not seem very strong and are overly focused on Martin Harris. They seem less convincing when contrasted with numerous reliable statements demonstrating that witnesses Oliver Cowdery and David Whitmer were well respected and very credible. Click here

The mistake that is made by 21st century Mormons is that they’re seeing the Book of Mormon Witnesses as empirical, rational, nineteenth-century men instead of the nineteenth-century magical thinking, superstitious, inconsistent, and treasure digging men they were. They have ignored the peculiarities of their worldview, and by so doing, they misunderstand their experiences as witnesses.

The CES Letter seems to realize that it cannot directly discount the testimonies of the Three Witnesses, so it resorts to character assassinations and attempts to draw parallels from other religious movements. Apparently the testimonies of the Eight Witnesses were deemed unimportant (but they are not) or too difficult to rebut.

At the end of the day? It all doesn’t matter. The Book of Mormon Witnesses and their testimonies of the gold plates are irrelevant. It does not matter whether eleven 19th century treasure diggers with magical worldviews saw some gold plates or not. 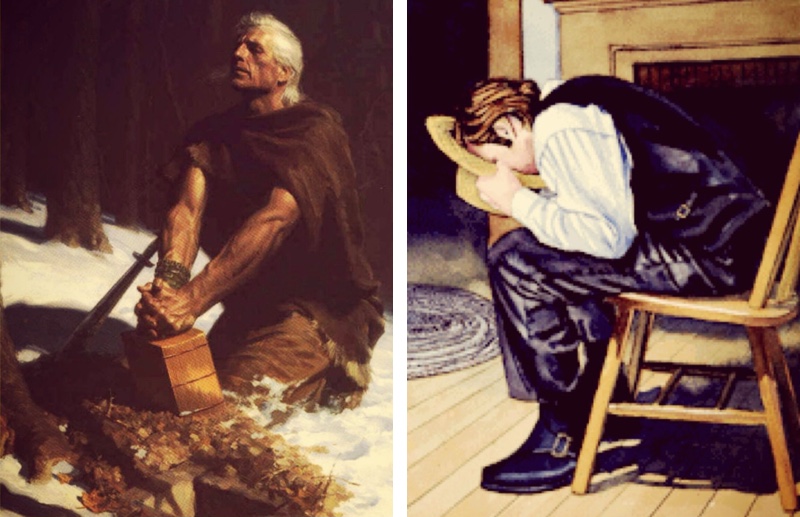 Moroni dies and comes back as a resurrected angel to deliver the gold plates to Joseph for translating the Book of Mormon.

Joseph uses his rock and hat instead for dictating the Book of Mormon we have today.

Whether Joseph Smith looked through the seer stone towards the plates or not is unimportant. The translation process occurred by the "gift and power of God," not through some optical juxtaposing of marks on the plates to make English letters appear in the seer stone(s).

A book cannot be translated unless it was written. The CES Letter alleges the record on the gold plates was not needed, which is incorrect. How could an unwritten book be translated?

Records show that the translation was carried out openly while Joseph had possession of the plates.

Joseph had no opportunity to hide notes or books, so claims that he was copying from another manuscript or borrowing from something already written are not supported.

The plates had a physical reality, and Oliver Cowdery insisted that "I beheld with my eyes and handled with my hands the gold plates from which it was translated. I also beheld the Interpreters. That book is true…I wrote it myself as it fell from the lips of the Prophet."

Contrasting accounts of the method of translation exist. Oliver described Joseph "as sitting at a table with the plates before him, translating them by means of the Urim and Thummim, while he (Oliver) sat beside him writing every word as Joseph spoke them to him. This was done by holding the 'translators' over the hieroglyphics..." This alternative technique was confirmed by John Whitmer, who said of Oliver that "[w]hen the work of translation was going on he sat at one table with his writing material and Joseph at another with the breast-plate and Urim and Thummim. The later were attached to the breast-plate and were two crystals or glasses, into which he looked and saw the words of the book."

The translation was carried out in a way that did not seem weird or sinister to those who observed it.

The hat detail causes problems for the critical theory that Joseph cheated with notes while dictating. With a curtain in place, it is much easier to postulate that Joseph used notes or a Bible in the translation process. With the stone and the hat, however, witnesses were able to view the entire process, thus highlighting the total lack of notes or Bible in the translation process. David Whitmer stated there was no curtain.