Note: This page pertains to a chart only used in a prior version of the CES Letter that has since been removed 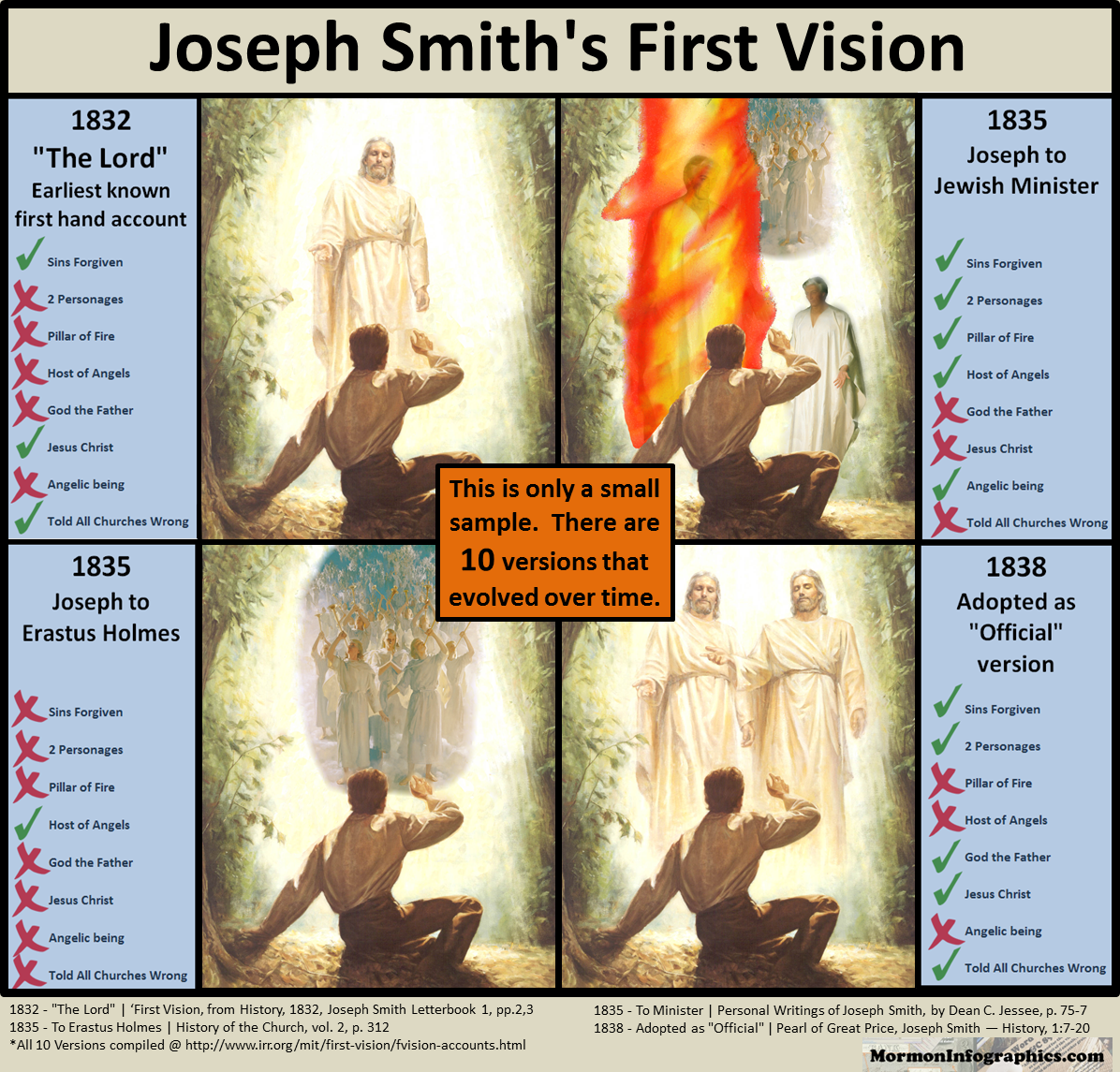 The Chart in The CES Letter purports to compare four accounts of the First Vision in order to show dissimilarities. The primary criticism is that some accounts include information that is not found in other accounts. What it does not acknowledged is that the accounts were of differing length. One had only 9 words (which most researchers do not consider to be a separate account).

These accounts were compared with their differences plainly noted in an article in the April 1970, Improvement Era, an article that the author of The CES Letter apparently did not read. 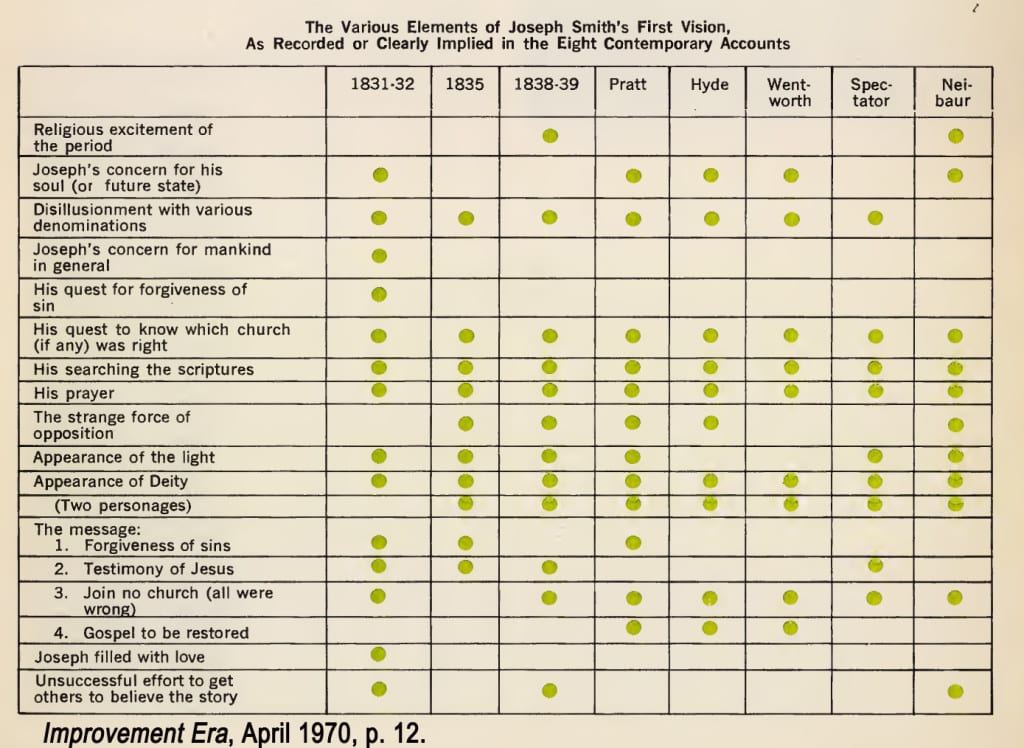 A close reading of the accounts below shows that some ambiguities can be identified, but no plain contradictions are found.

a piller of  fire light above the brightness of the sun at noon day  come down from above and rested upon me and I was filled  with the spirit of god and the <Lord> opened the heavens upon  me and I saw the Lord and he spake unto me saying  Joseph <my son> thy sins are forgiven thee. go thy <way> walk in my  statutes and keep my commandments behold I am the  Lord of glory I was crucifyed for the world that all those  who believe on my name may have Eternal life <behold> the world  lieth in sin and at this time and none doeth good no  not one they have turned asside from the gospel and  keep not <my> commandments they draw near to me with their  lips while their hearts are far from me and mine anger  is kindling against the inhabitants of the earth to visit  them acording to thir ungodliness and to bring to pass  that which <hath> been spoken by the mouth of the prophe ts and Ap[o]stles behold and lo I come quickly as it [is] written of me in the cloud <clothed> in the glory of my Father.

a pillar of fire appeared above  my head, it presently rested down upon my <me>  head, and filled me with joy unspeakable, a  personage appeard in the midst, of this pillar  of flame which was spread all around, and yet  nothing consumed, another personage soon appeard  like unto the first, he said unto me thy sins are  forgiven thee, he testifyed unto me that Jesus Christ  is the son of God; <and I saw many angels in this vision>

. . .the time I received the first visitation of Angels.

I saw a pillar <of> light exactly over my head above the brightness of the sun, which descended  gracefully gradually untill it fell upon me. It no sooner appeared than I found myself  delivered from the enemy which held me bound. When the light rested upon me I saw  two personages (whose brightness and glory defy all description) standing above me in the air.  One of <them> spake unto me calling me by name and said (pointing to the other) “This is my  beloved Son, Hear him.”

My object in going to enquire of the Lord was to know  which of all the sects was right, that I might know which to join. No sooner therefore  did I get possession of myself so as to be able to speak, than I asked the personages who  stood above me in the light, which of all the sects was right, (for at this time it had never  entered into my heart that all were wrong) and which I should join. I was answered that  I must join none of them, for they were all wrong, and the Personage who addressed me said  that all their Creeds were an abomination in his sight, that those professors were all  corrupt, that “they draw near to me to with their lips but their hearts are far from me, They  teach for doctrines the commandments of men, having a form of Godliness but they deny  the power thereof.” He again forbade me to join with any of them and many other thing[s]  did he say unto me which I cannot write at this time

BELOW IS A FIRSTHAND ACCOUNT THAT THE CES LETTER IGNORES.

I was enwrapped in a heavenly vision and saw two glorious  personages who exactly resembled each  other in features, and likeness, surround ed with a brilliant light which eclipsed the  sun at noon-day. They told me that all  religious denominations were believing in  incorrect doctrines, and that none of them  was acknowledged of God as his church  and kingdom. And I was expressly com manded to “go not after them,” at the  same time receiving a promise that the  fulness of the gospel should at some future  time be made known unto me.